The art or craft by the joiner; cabinet making. Work done by a joiner; fine woodwork. 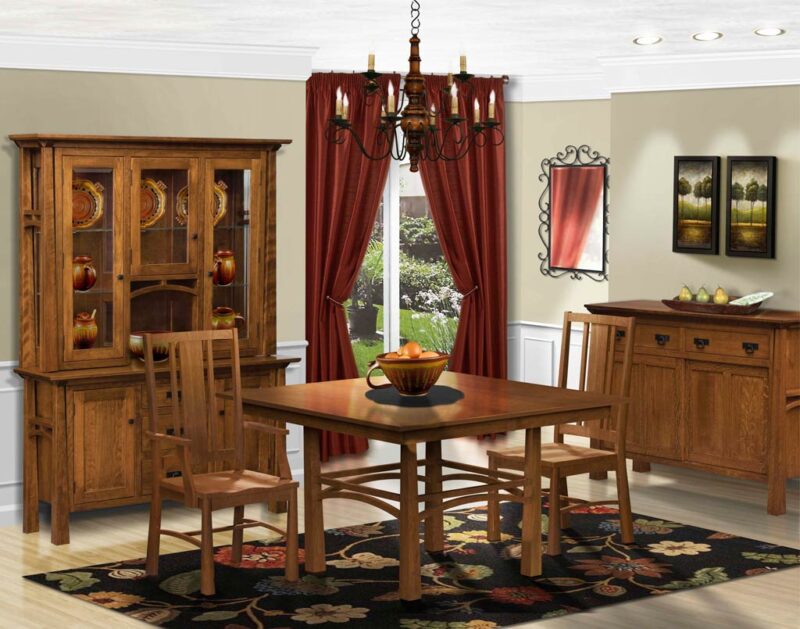 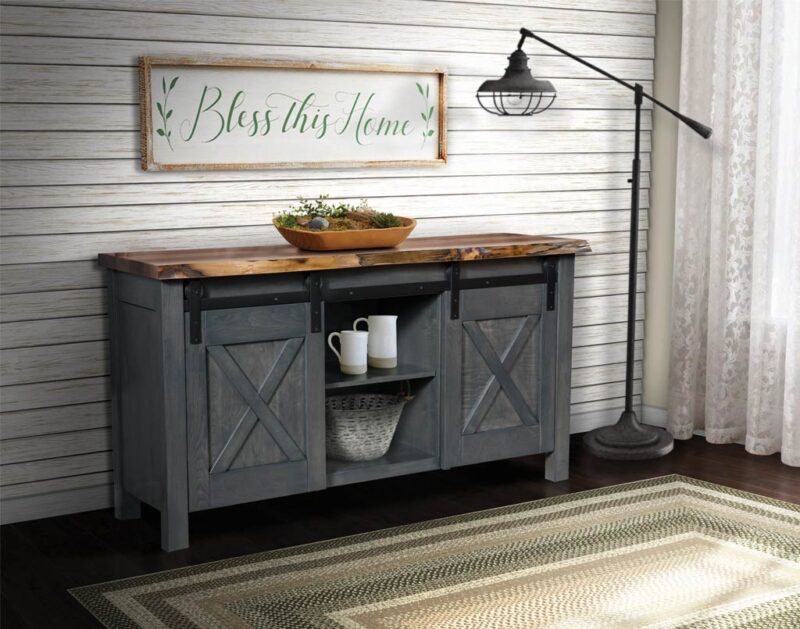 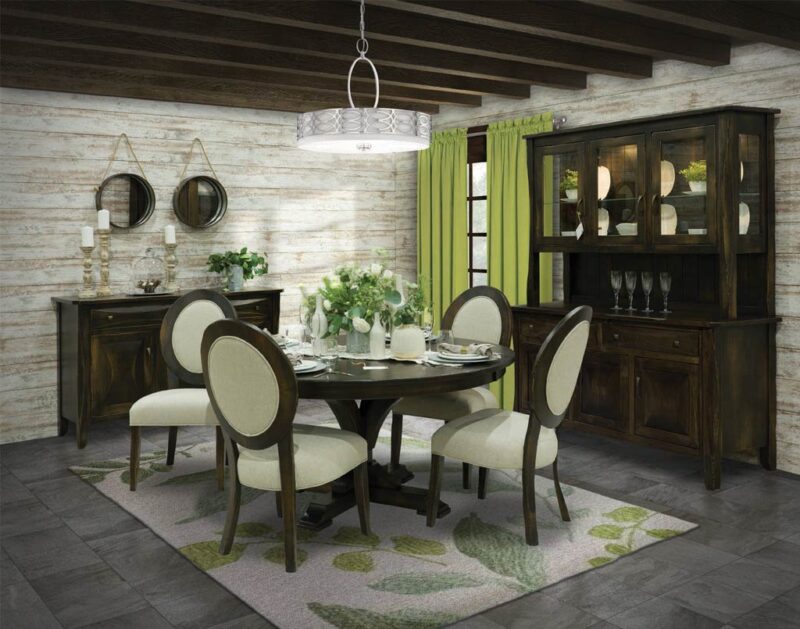 by Candice Parker and Abby Wenger

My morning drive is one that I look to every day. Cruising east into the sun I catch glimpses of barns and tall silos silhouetted against a painted sky. On cool mornings I bear witness to the seam rolling off horses’ backs as they race each other in the field. On warm summer days the roads are active with people already halfway through their day. Beating the heat means rising before the sun comes up. On those days I drive with my windows down. As I pass a buggy on the road the familiar sound of the clip clop of the horses’s hooves reminds me of a heartbeat, one the pumps life into LaGrange and Elkhart Counties. This region holds the largest settlement of Amish in the state of Indiana. Both counties thrive on tourism and manufacturing, both sustained largely by the Amish. 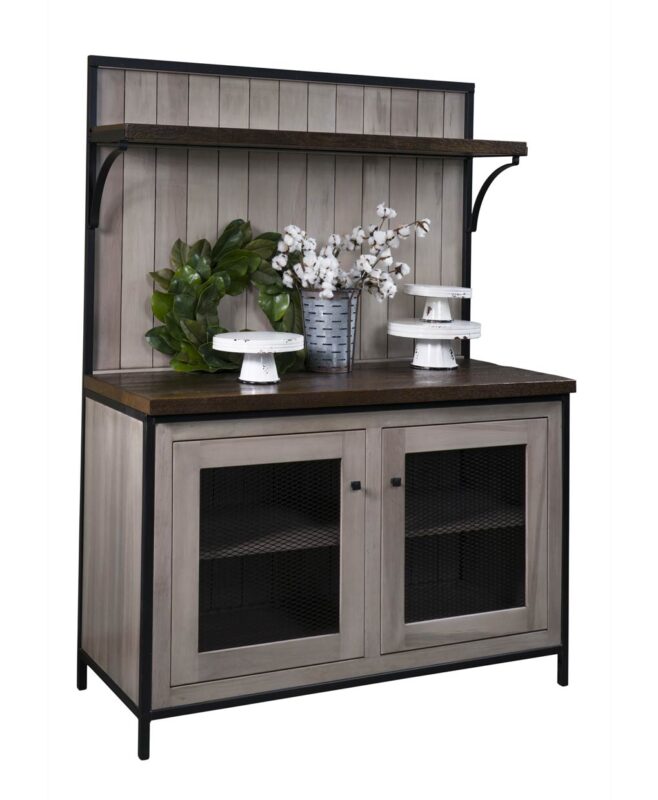 Growing up, I had dreams of moving far away, neck deep in high fashion, be it clothing or interior design. As a woman in my thirties, I never anticipated moving back home and working with the plain community. I work for a small marketing firm in my hometown of Shipshewana, Indiana, and I have found beautifully crafted designs where I least expected: home.

I get to routinely work with these craftsmen. Let me introduce one: Verlin Lambright at Townline Furniture in LaGrange. It seems cliché to talk of Amish Quality furniture, but in a culture that honors fairness, honesty and hardwork, it’s kind of what you get. Our team of Abby, Liz and I set out to learn more about our builders and their origin stories.

On one of those warm summer days we arrived just outside the town of LaGrange at the shop of our featured builder. Located on a road numbered by the county as 00 East/West (Townline) is how Townline Furniture got its name. Verline Labright greeted us as we got out of the car.

The son of Clayton Lambright, Verlin is a second generation owner. His father Claytown started in full time in 1978, just one year before Verlin was born. “I basically grew up with it. Growing up, I would help in the shop until late in the evening. My memories are from playing with the wagon in the shop, roller skating, rollerblading, skateboarding, whatever, in the evenings while Dad worked… until I was old enough to help.”

At age fifteen, Verlin started working full time in the finish shop. Two of Verlin’s older brothers had been involved in the shop, but eventually went their separate ways while Verlin stayed. Gradually, he toke over more jobs as his father stepped out of them. The two discussed the option of him taking over ownership, but it wasn’t until 2013 that the paperwork was filled out and it finally came to fruition.

According to Verlin, “It really didn’t change anything at that point besides the paperwork.” Paperwork aside, Verlin’s acquisition of the business he had witnessed his father establish had its perks. When asked what is was like coming into the business as a second generation craftsman, Verlin replied, “Actually it’s exciting because a lot of the stores we deal with, I got to know them as I grew up. If I would have bought it from someone else or stepped in, you have connections, but not the same connections.”

It’s these types of connections that showcase the investment in family and community. Building relationships extends outside family and friends, right into the business world within which they operate.

Connections and relationships build a solid establishment, but they all mean very little if the product is not worthwhile. For Townline Furniture, the quality and distinctness are ever present and the process to get there is far from thoughtless. When designing a new hutch, buffet, or server, the design changes multiple times on paper before it ever gets built.

“Upon seeing a new Townline piece,” Verlin says, “we want customers to be in awe. Our goal is to hit the wow factor. It has to be functional, too.”

Sometimes inspiration for that wow factor will come from a custom piece they built, giving way to a brand new style. It is not just Verlin and Clayton who enjoy creative designing. Verlin’s wife, JoEllen, does some of the designing as well. With multiple talents creating various looks and styles, how does Verlin select names for the new styles? With a smile on his lips, he willingly shared his use of the road atlas for many. Interestingly, we later found out this is a common process for our builders. 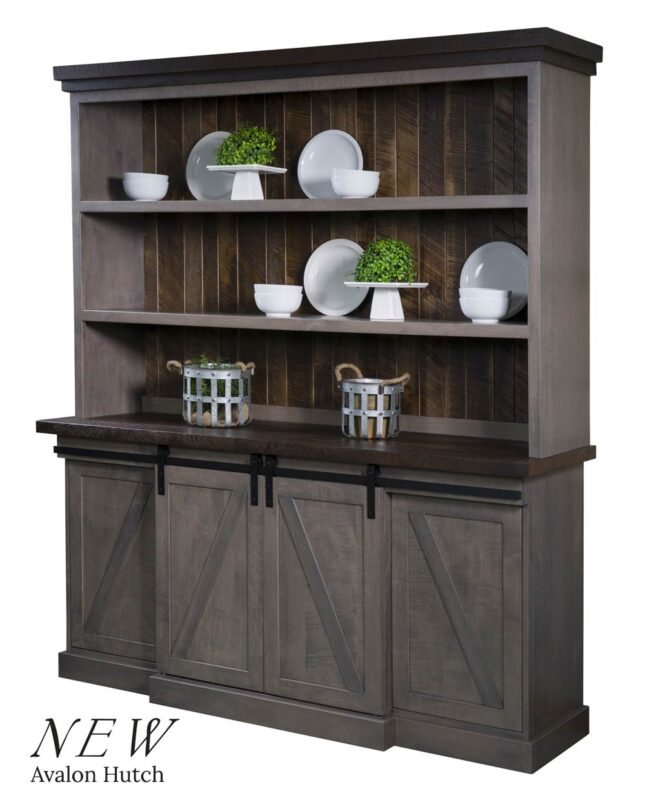 From idea conception, to the fleshing out the design, to the naming of the final work, this process from start to finish takes many forms. We asked if he had a favorite part in that process he laughed, “It probably depends what time of the day you ask me that question. It’s a combination. It’s like eating a chocolate cake. A chocolate cake by itself isn’t very good, but if you add frosting and cup of coffee, you have a good snack.”

Looking to the future, we asked if any of his children were interested in the shop. Thinking it over, he concluded there are some interested, but he just doesn’t know how much yet. Currently, hi oldest daughter is working in the shop, making it a three generation effort. According to Verlin, the oldest generation is not stepping away anytime soon.

With respect for his father, Verlin shared, “He’ll never retire. He like what he does. If he would retire, he would get old really fast.” It’s that kind of passion and dedication to the art of furniture building that distinguishes Townline Furniture from the millions of mass producing companies around the glob.

We asked Verlin how he operates a full woodworking shop without traditional electricity. Walking us to a 10′ x 20′ shed, he slid open the door to reveal a generator filling most of the shed. A machine that size is bound to produce high level of noise and this one did not disappoint, making conversion difficult. From the boisterous shed, we headed toward the shop and a building where large battery pack sat on the floor with inverters hanging on the wall. It’s here the power from the generator is store in batteries. It then runs through the inverter, powering the tools and machines in the workshop. It also powers another very import feature of this shop, climate control. To deliver the best quality product, it is import to keep the moisture level under control so the wood doesn’t warp.